Countryside Pest has all your pests under control. Below is a list of pests we eliminate. Click on one to learn more about it.

Spiders are a pest that no one likes to have around the home. There are a lot of common household spiders that are harmless, but there are two spiders in Oklahoma that can be Dangerous to you and your home.

In Oklahoma, the two most dangerous spiders are the Brown Recluse and the Black Widow. Both are venomous and if bitten, you should seek medical attention immediately. 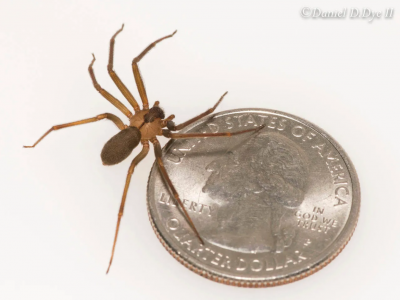 The Brown Recluse is also called the Fiddleback spider because of the violin shaped marking behind the three pairs of eyes. It lives up to it’s name as being brown or tan in color and prefers to dwell in out of the way places. It has long, thin legs and an adult is only a half an inch in length.

In the summer-time, eggs hatch in about a month’s time with more than 40 spiderlings. If the weather has been mild, there will be plenty of spiders that can reproduce as well as plenty of bugs for them to eat. They can go without food or water for long periods of time, and can live up to 5 years, reproducing every year.

The Brown Recluse hunts at night and sleeps during the day. They can be found hiding in closets, shoes, under couches & chairs, bathrooms, old clothes, boxes, basements, garages, & attics. They are reluctant to bite, but when provoked – even unwittingly, like by putting on an article of clothing that they are in – they will defend themselves. Depending on where and how the bite happened, some people may not even know they’re bitten until hours later. Most bites will cause intense pain and hours later a puss-filled blister usually emerges from the skin. The venom will kill the skin around the bite up to a half-dollar in size, and it will become red and swollen. Fever may occur and the infected skin may deteriorate exposing muscle. There is no specific anti-venom, but physicians can combat the venom with steroids. 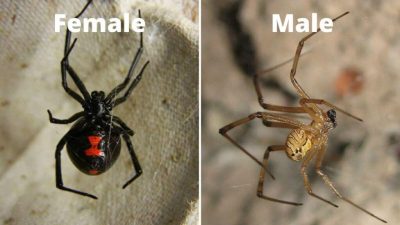 Female black widow spiders are about .5 inch long, to about 1.5 inches long when the legs are spread. Males are about half the female’s size, with smaller bodies and longer legs. Male black widows frequently have yellow and red bands and spots over their backs, as do both sexes of black widows in their immature stages. Juveniles of both sexes resemble the male and are harmless to humans.

Black widow spider webs are commonly found near ground level inside storage sheds or in small holes and crevices around building foundations and outdoor furniture. Inside, webs may be found in crawl spaces and basements.

Black Widow spiders are non-aggressive, but will bite if they feel threatened. Bites usually occur by accident. Bites are rarely fatal, but can cause serious pain and complications. Within seconds of being bitten by a Black Widow, you’ll feel pain and throbbing at the bite site. The area around your wound will begin to swell, and you may experience muscle contractions. If your diaphragm is affected, breathing becomes labored. Your heart can begin to race. You may become nauseous and sweat or have chills. 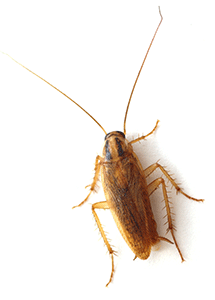 The history of the cockroach is one of nature’s greatest success stories. Roaches are among the oldest living things on the planet–literally older than the hills. Over 300 million years ago the Appalachian Mountains and the Alps were rising–and the roaches were there. Roaches are remarkable survivors. They can go weeks without food or water, and they have adapted to conditions in nearly every corner of the globe.

However, of the nearly 4000 species, only five are major indoor pests in Oklahoma

Roaches transmit at least 13 human diseases, usually by contaminating food through simple body contact or through their saliva or excrement. Their calling cards include common food poisoning as well as typhoid, dysentery, hepatitis, allergies, and leprosy.

Roaches may be found in restaurants, office buildings, and your home. If roaches do get in your home, you can make an undesirable environment for them by keeping your home neat and clean. Don’t let trash pile up and provide breeding and hiding places. Store food in containers which cockroaches cannot penetrate. And don’t feed roaches by letting crumbs accumulate around dining or food preparation areas.

Although these steps will discourage roaches, they cannot eliminate them. To stamp out roaches, and keep them out for good, you’ll need the help of our Professional pest service; we can prescribe a treatment and/or a program that will keep the roaches away. 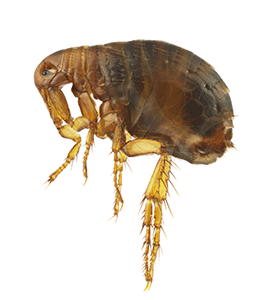 The typical life cycle of a flea lasts from 15 to 33 days and fleas pass through four stages during this cycle: (1) egg (2) larva (3) pupa, and (4) adult. Fleas live on animal blood and move from one host to another– from dog to dog, dog to cat, animal to man, etc. Adult fleas lay eggs on the tips of the pet’s hair and as the the pet moves moves through your house, these microscopic eggs drop onto floors or furniture where they complete the developmental process. This is how a flea infestation begins. Flea stages develop in the house on carpeting, in cracks & crevices in floors, debris in basements, around pet’s beds, and especially in dust or lint on the floor or in the folds of furniture.

After a flea bites you, a small, discolored bump forms. A discolored ring or halo may appear around the bite. Flea bites may appear in a straight line or a cluster of many bites. Flea bites most commonly occur on your legs, especially your feet, calves and ankles. 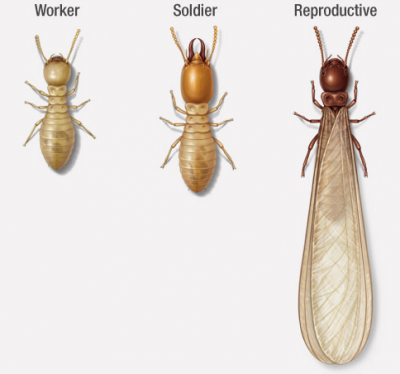 Termites can squeeze through cracks as narrow as the thickness of a penny. Expansion joints, foundation cracks, tiny gaps around plumbing and electrical service entries are all opportunities for termites. Termites will often leave some evidence of their presence. In Oklahoma, the main termite that we deal with is called the subterranean termite. This means that they live in the soil, and they feed on wood as stated above. They originally lived in the sandy soil of river beds, and fed on the drift wood in those beds. Now, since the river sand is transported to home building sites, the termites and their eggs are placed right in to the soil below the concrete slab. When houses are built, they are supposed to be treated for termites by spraying the soil, the problem is, that most treatments are done cheaply with inexpensive materials and don’t last very long.

When our Professional service comes to your home to inspect, we will look for small holes in wood and sheetrock, crumbling surface on drywall, and sagging doors or floors. There might be mud or dirt blobs on the surface of wood or drywall, these are signs of shelter tubes that termites travel through.

Another sign of termites are insect wings that are shed when they swarm.

Countryside Pest uses Termidor exclusively for termite control. If your going to do a job, why not use the best tools you can get, that’s why we use Termidor. Its action works like a bacterial virus, once they are exposed to it, they spread among them and it wipes them out. We give an initial warranty with our work, and make it renewable every year after that.

Here are some unique advantages of Termidor termiticide: 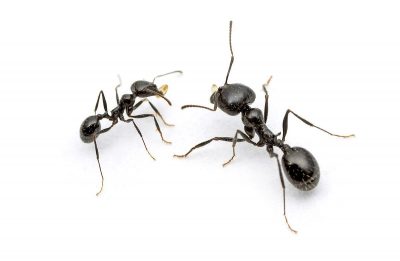 There are more than 4000 species of ants that live in our world. They can survive and thrive just about anywhere, from the sea to over 14,000 feet above, from the artic regions to the tropics, and from very moist to dry desert ground. Ants protect themselves from climate and their natural enemies by living in the ground, or inside trees or buildings.

Here in Oklahoma, we only have to deal with about 20 different species of ants. Some of the most common ants are carpenter ants, argentine ants, fire ants, house ants, pharaoh ants, etc. Many ant species make no secret of their nesting spots, then, others seem to come in from nowhere. They can invade your home or business to the point of driving you crazy.

You need a Professional Pest Service that can help you identify and control These pests. This may include treating the inside of your home or business with special sprays or bait, and also dusts– all of which are applied carefully and are environmentally safe. The outside perimeter of your home or business and the grounds may need treatment as well. There are special sprays and/or granules that can be applied for outside treatments. We also offer maintenance programs to keep these pests under control. 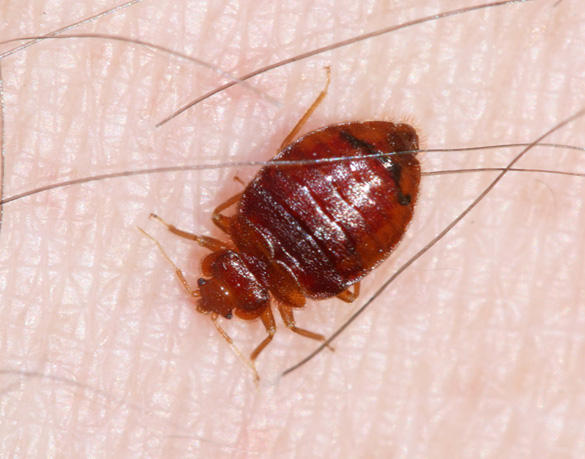 Ticks can carry disease that can be dangerous to humans. The complete life cycle of a typical tick lasts from 47 to 122 days. Ticks pass through four developmental stages during this cycle: (1) egg (2) larva (3) nymph, and (4) adult. Dogs pick up ticks from infested areas and carry them into your house where the tick may drop off, lay eggs, and begin a new generation. The tick has to have a blood meal from its host in order to reproduce. Some species of ticks can lay up to 5000 eggs during its life.